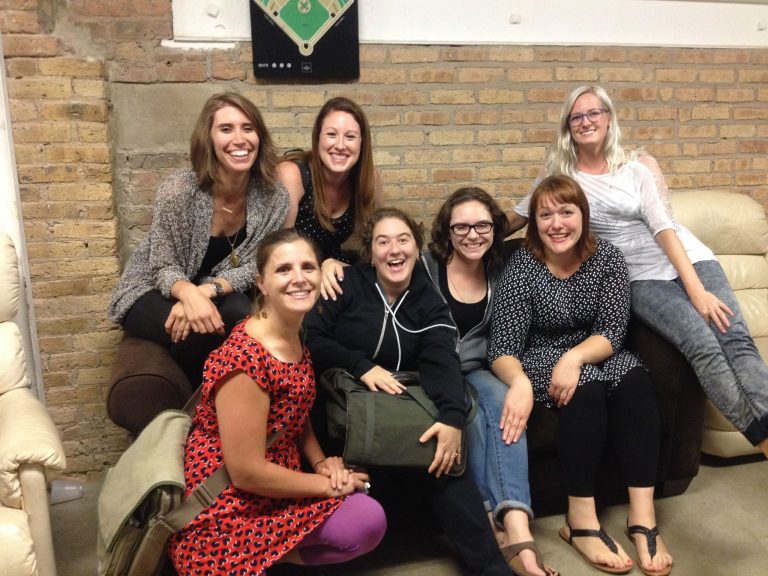 “I’ve been thinking about how the “and” in “yes and” is really empowering because even if somebody makes an offer to you in a scene that you’re uncomfortable with, you can say “yes, you made that offer, and I’m going to do what I want with it.” You don’t have to let them invade your space or let them do anything that you’re not comfortable with without you also having a say in it, and you being able to steer that scene, that conversation in a way that makes you feel better.” – Mary Cait

Mary Cait Walthall performs with SuperHuman in Chicago, an all-woman improv team that just finished a residency at the legendary iO Theatre. Current members Sarah Ashley, Amber Walker, Katie Klein and Jo Scott sat down with Dani and Val from the Improv Embassy to share their thoughts on being a female improviser in 2016. The rotating cast of performers also included guru Irene Marquette.

“Our friend Irene Marquette, who lives in LA right now, has always said that improv is one of the most feminist art forms because everybody starts off onstage as equals.  And you go out there and you can be whatever you want to be and there’s no male or female, it’s just like you’re an artist,” says Sarah.

In ideal conditions, improv allows women to be anything, and empowers us to support and play hard in a safe and supportive environment. However, despite all our strengths and talents, when our choices are undermined by a scene partner it can feel like you’re getting the rug pulled out from under you.

“Sometimes actually my Harold teammate, when I’m playing a boy I feel like I’m so clearly a boy, but he’s the only person that’s still kind of like thinks I’m a lady and … it blows my mind,” says Jo, who plays such acutely observed male characters, we hardly see her petite female frame.

Mary Cait agrees: “Women really wouldn’t get to play boys even if they came out more like, ‘I’m clearly a boy!’ They’d be like, ‘Mom!’ And I think that playing with people who all are like you … you get to use your imagination maybe more fully because other people aren’t making you be like, ‘no, no … you’re kind of just going to be you.’”

Long before SuperHuman was a mainstay in Chicago, it wasn’t uncommon for female players to find themselves limited to being token participants.

“…20 years ago,” recounts Sarah, “it was not easy to be a female, and you really had to stay here, but like it’s easier to just quit. But now if there’s a group of people gathering around, it’s like, yeah, we can stay here, we can grow, we can be nurtured. It’s strength in numbers, and time. And I think sometimes maybe females in the past, or maybe people of colour in the past have just been like… ‘my time’s not worth it, because I’m not being heard.’”

The barriers that women sometimes find in improv are often reflections of those we face in the real world, which often boils down to transcending our gender expectations and being able to exist as complex individuals. It can be an exhausting struggle to reconcile our love of the artform and the problematic situations that can often arise:

I remember … a practice for an improv team where I was the only female, and we did a longform piece in which they made me the person that everyone had slept with, and then in the last scene, I was there in the scene with them and they were just naming different things that they had done to me. And I had no idea what to do … it felt completely disempowering, and that was specifically a team in which I came on and was like, I’m obviously being a guy and they did call me “Mom” and I was like, “Fuuuuck youuu. This was like … 7 or 8 years ago when I was new in the city.” — Mary Cait

Fortunately, all-female collectives like SuperHuman help create a new normal, which allows performers to follow their instincts and not be limited by their identities. When women lean into our shared frame of reference, not only does it bring agency to the set, but the group mind coalesces much faster.

As the artform becomes more sophisticated, improv theatres everywhere are striving to become more mindful communities, constantly revisiting their standards and practices to ensure all voices are heard. As a platform for developing new talent, we at the Embassy take our responsibility very seriously and aim to create a safe and welcoming place for people of all identities to hone their craft. Because improv belongs to everyone!

“ … people who are starting improv now, I think they have a distinct advantage … people are starting to get more woke, you know … teachers calling that shit out, and guys trying to be more, you know, respectful and socially aware and stuff like that, so I’d be curious to see what somebody who’s starting improv now feels about it. I’m sure that they still feel a little bit disenfranchised, but probably not nearly as much as we did and we didn’t feel it nearly as much as the people who came before us either.” – Amber

And in Ottawa, things are getting better all the time. This weekend, an all-female collective will be performing in the debut of a monthly variety show, Unannounced: A Comedy Show With Humans (but mostly women) on Sunday night at 8pm at Pressed (750 Gladstone Ave). And for more womanly goodness, check out reigning champions DANGERSTORM compete in the next Cagematch at the Improv Embassy, on the 29th!

This post was written by Dani Alon and Val Perelshtein.