shopping_cart
Blog
Behind the scenes: How ‘Quest Friends Forever: A D&D Improv Show’ was created
Thursday, October 13th 2016 by The Improv Embassy 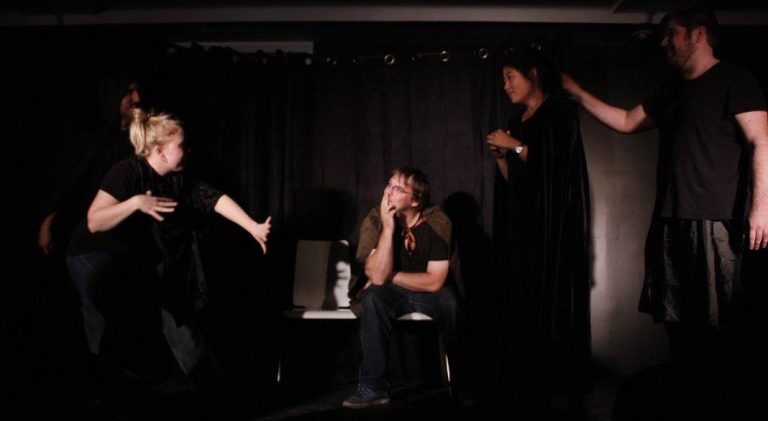 Rich Hilborn is an improviser and the creator of QFF:

I came up with the original idea for Quest Friends Forever: A D&D Improv Show in May. I learned a lot in the process and I want to share some of the most important lessons.

People want to be involved

“You’re just finishing Improv 101, people aren’t going to help a newbie with his stupid nerd show.” That’s what I was thinking at first: that I would have to pull teeth and wait a while to get this idea off the ground. Instead, I had a bunch of support and a list of people of people to talk to about this, suddenly I’m talking to Chris [Hannay, Embassy production director] and Angus [MacDonald, Embassy faculty] about this idea and it’s off the ground and it’s going to be a thing!

Your idea is going to change

Much like an improv set, ideas change. Originally I wanted the show to be called Charisma Saving Throw and we were going to actually play Dungeons and Dragons onstage. Looking back, those are pretty bad ideas and I’m very happy that we came up with the show we have.

You gotta put in the leg work

At some point your idea has moved past you. As you get closer to the date, you might find yourself less involved and more just enjoying the process. However, you need to keep going and putting work in. Making Facebook events, going on to other event sites, talking up your show, going and finding places to get costume pieces and making props. If the show needs a giant six-sided die, go and figure out how you can do that. Be willing to do the stuff that will make the show be the best it could be.

People might want to see your stupid nerd show

We sold out the Embassy for our first show. I wasn’t sure how many people would come but I wasn’t expecting that. It was this amazing feeling because of the process and because of the work that everyone put in to make this show a reality. And here’s the thing, we could have had less people and it would have meant the same to me, just that people would actually pay money to see the daydream I had a few months back was astounding to me.

As I am writing this, we are pretty close to putting on the second showing of Quest Friends Forever. [Friday, Oct. 21 — get your tickets in advance!] I am so excited to be putting it on again! And the week after that another of my nerd ideas is hitting the stage during The cHAIRraiser. It’s incredible to be able to be involved with these shows and to work with people on them!

I hope this helped in some way, go out there and think big!

Got an idea for an improv or sketch show you want to get off the ground? We are always looking for pitches. Email production director Chris Hannay.