shopping_cart
Blog
‘Improv magic’: How to make up stories with Vinny Francois
Wednesday, November 23rd 2016 by The Improv Embassy 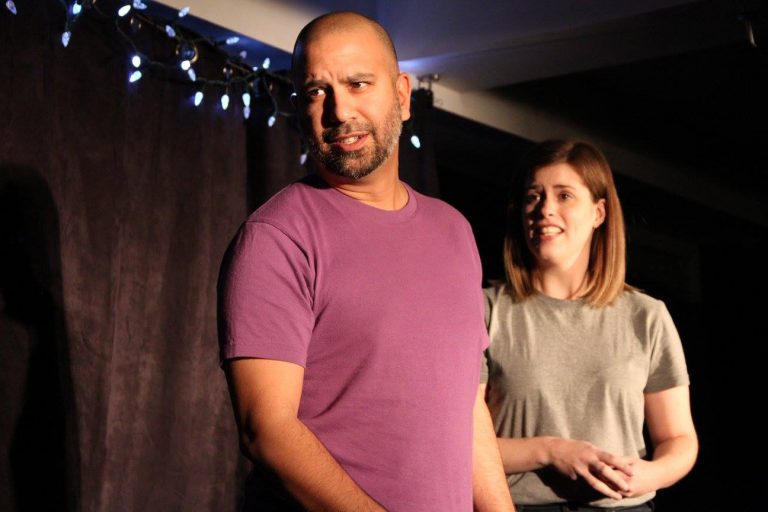 Vinny Francois is co-founder and business director of Montreal Improv. Vinny, a specialist in narrative improv, was in Ottawa last weekend to showcase a format he performs with fellow performer Katie Pagnucco: The Rewind, a story told in reverse. Vinny took some questions from the Embassy about narrative-focused improv formats. The following is an edited transcript.

Improv Embassy: What is it about narrative improv – improvisational theatre that focuses on storytelling – that you find so compelling?

Vinny: I like that narrative improv is difficult to do well. You’re always looking to challenge yourself. When performing an improvised narrative, you’re trying to create a story and emotional arc on the fly.
If you’re doing it right, you’re steadily building the tension, raising the stakes and creating a crescendo.
Once the narrative resolves, that tension that builds up over time makes the resolution that much more satisfying. The audience experience – when it works – is even more magical than the usual improv magic.

What are the advantages to improvising a story, instead of just writing it down ahead of time?

The disadvantages are probably obvious. But the advantages are that the audience is sharing in the discovery of the story at the same time as the performers. The improvisers will create stuff that they never would have thought of while writing or editing (which can be an advantage and disadvantage).
You also have more leeway to be ridiculous. There’s a public expectation of improv as fun and silly and the audience will get on board with the bizarre more readily.
Of course, we should also be able to craft a serious improvised tale with equal skill.

One of the first ones I saw stands out. When PGraph from Austin first came to Montreal, they did a French farce in full makeup and costumes. It was the story of a father returning home after being away for a long time. His wife was unhappy to see him return and his kids were thrilled and looking to cause mischief. The kids ended up bringing the mother and father back together through a series of tricks, pranks and naughty behaviour. It was pretty great!
In London, I directed an improvised tragedy with Heather Urquhart and Jules Munns from the Maydays. It featured lots of pauses and music, and the story is a couple breaking up over three acts. It featured two people who came from different backgrounds: one came from money and the other didn’t. They fell in love, traveled and moved in together, but grew apart because she wanted to work and he didn’t see the need. What made it sad was that it was neither of their faults. They just grew in different directions. It felt real and inevitable and their performances were touching.

Any words of wisdom for someone who wants to try tackling improvised narratives?

Learn what a “story spine” is and internalize it.
Learn to remix the story spine and craft your own story spines. The simpler your story spine, the more flexible it is, and the more it can do.
Learn to breakdown stories you already know to see how they are constructed.
There’s already plenty to improvise so if you stick to a story spine, your job is already half done.

The Improv Embassy is excited to launch its first class on narrative improv in January, taught by Chris Hannay (director of Quest Friends Forever) and Leslie Cserepy (Elgin Street Improv), whose duo Slow Burn created a new one-act play every night at the 2015 Fresh Meat Theatre Festival. Find out more about the course on our classes page.