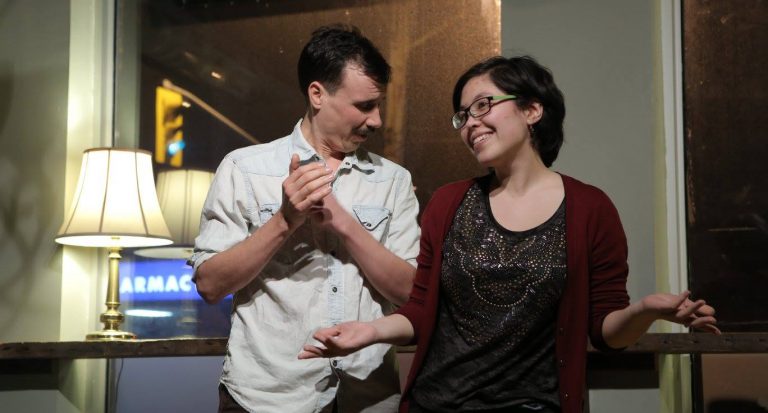 By Chris Klippenstein. Chris (right, in picture) is a writer, improviser and graduate student at the University of Toronto.

I love improv because it only lives for a moment. It’s there, then it’s gone. That’s what makes it exciting.

Although an improv performance is fleeting, the word “improv” has a surprisingly stable history. I’m sure you won’t be surprised to learn that “improv” is short for “improvisation,”[1] which dates all the way back to 1777. “Improv,” on the other hand, is a young little word from 1970. That abbreviation might seem obvious to us now, but it took nearly two hundred years to enter our language. When you tell people that you do improv, you’re not only connecting yourself to an activity, but to a very specific time period.

As it turns out, the first recorded instance of the word “improvisation” was in the diary of Hester Lynch Piozzi, a female British diarist and writer. Here’s the excerpt: “Baretti and I were talking one Day of the Art of Improvisation: Johnson says he, can do it as well as any Italian of us all if he pleases.”

(Additional fun fact: This “Johnson” is the famous British writer Samuel Johnson, a close friend to Piozzi.[2] For a long time, her work has been read primarily as a source of information about him. Only recently have scholars realized that – surprise – she was an interesting and talented person in her own right.[3])

The root of “improv” goes back to Latin improviso, meaning “unforeseen; not studied or prepared beforehand.”[4] That’s almost exactly the same sense in which we use it today, which I think is fairly remarkable. A lot has changed since classical Latin was a living language.

I find it rather beautiful to think that improvisers in the eighteenth century were, like us, existing in the moment. Not the same moment as ours, but making that same essential commitment to the now and embracing whatever it brings.

Looking at the history of “improv” makes me wonder which linguistic forms we’re still missing. We have the verb “improvise” (from 1788) and adjective “improvised” (1822), but I’ve never heard of an adverbial form of “improvise.” Let’s coin one together – “improvisedly.”

Here, I’ll use it in a sentence: I wrote this article improvisedly, but with great love.

Oh, wait: “improvisedly” already exists, and it dates back to 1538. The OED distinguishes between two slightly different meanings of “improvisedly,” one of which appeared in 1538 and disappeared after 1568 – a remarkably short life span – and the other which appeared in 1851 and was used as recently as 2010, though it’s listed as “rare.”

Now there’s an interesting linguistic twist. Why did “improvisedly” come first, beating “improvisation” by two hundred and thirty-nine years? Why did it have such a short lifespan in the sixteenth century? It makes sense that “improvisedly” was revived around the same time as other improv-related words began to circulate, but it has remained rare. Why have we, as a culture, collectively decided that we don’t need it?

Questions for another day (or perhaps for a doctoral thesis). I suppose we don’t need to immortalize ourselves by coining “improvisedly,” since this article was still written with great love. And if these words only last in the mind for a moment, well, that’s the nature of the game, isn’t it?

Note on sources: The meat of my information came from the online OED, which I used because it’s the best and most reliable source known to me. Unfortunately, the OED is only accessible through one’s university or via a paid yearly membership, which makes it awkward to cite. People who wish to read up on more details or check my sources won’t be able to. (I’m not expecting many of those, but in the interests of academic integrity, it bothers me.)