shopping_cart
News
What We Learned About Inclusion in Performance
Monday, August 28th 2017 by The Improv Embassy 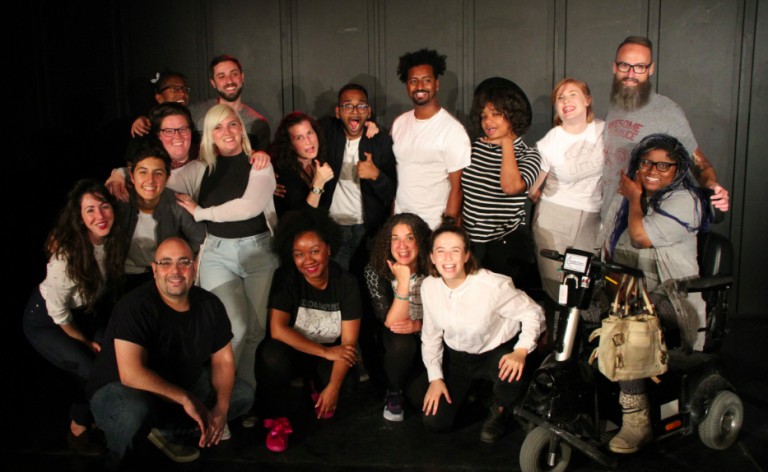 What does an inclusive comedy scene look like? And if we don’t have one now, how do we make one? The Improv Embassy hosted a panel discussion on Saturday that addressed these issues, part of our day-long “Truth In Performance” event.

Q: CAN YOU DESCRIBE WHAT YOUR ART SCENE IS LIKE NOW, IN TERMS OF INCLUSIVITY AND DIVERSITY?

LAURA: I think there’s still a lot more work to be done … the scene in general has to be a lot more welcoming. If the scene is better represented by people, all sorts of diversity, then more people will feel more comfortable to join the scene. But it is getting better. On a Monday, we had an open mic show celebrating Pride, and I think it was the first time, that I know of anyway, that all the performers at the Pride show, like two thirds of them, were [Queer], and that never happens on a Pride show in Ottawa, ever. It’s always people coming in from out of town.

AVAN: I feel like it’s hard for me to get my face out there because there’s no one that looks like me, there’s no one that has the same issues, the same struggle, or characters are not made with people like me in mind. So I find I’m always going for characters that are “able-bodied” and having to hide my disability and then, if I ever get onto a set, it’s always very hard. And then as a person of colour, I find that a lot of roles are written with the default being a white person, and not a person of colour.

Q: WHAT ARE SOME WAYS WE CAN OVERCOME BARRIERS WHEN IT COMES TO REPRESENTATION ON OUR STAGES?

CANDACE: Performing in more Queer spaces, so that other Queer people could see this is what we’re doing, and then performing again in other spaces that maybe they don’t see anything like us at all. Because I think that that does encourage people, “Oh, I can do this too.” So I do think inclusivity is about making a well rounded community, rather than sticking to what we know, trying to branch out.

LAURA: I think there aren’t a lot of queer comics onstage because they don’t see themselves represented onstage in Ottawa doing comedy.

COKO: For me, I think a more inclusive space, what I would love to see as the end goal, is that we get to be who we are onstage without being token.

DAPHNEY: For example we did this scene a while ago and I played Cinderella. Yes. And the other improviser I was performing with, she was very green, she said, “Oh my god, you can’t be Cinderella, you’re Black.” So the next thing I did, I called Coko onstage and I was like, “Really, cause Snow White is right there.” I picked the whitest princess … I don’t think she meant anything wrong by it.

AVAN: There’s a lot of physical barriers in the sense that a lot of places aren’t accessible. It would just be really nice to be able to attend bars that have standup, or go into a comedy club, or be able to get into spaces where we are, and I feel like that’s why a lot of people with disabilities don’t really think about stuff like that, because they know that they’re going to have to face these physical barriers all the time, and it gets tiring and they don’t wanna leave their home. And I don’t know Toronto, but downtown Ottawa is horrendous in terms of accessibility. And it would be really nice to have a downtown space where there could be accessibility for everyone that would want to attend.

Q: WHAT STEPS CAN BE TAKEN TO CREATE A MORE ACCESSIBLE SPACE? AND CAN YOU SPEAK TO THE ROLE OF COMMUNITY MEMBERS TO KEEP HARMFUL BEHAVIOUR IN CHECK?

LAURA: I think it’s just listening to people, listening to what people have to say. I get really upset when there’s an issue in the community that we talk about, and there’s just so many male comics — who have never had any obstacles in comedy, or never felt discriminated against — always speak up, and for some reason to be the voice to tell people, “Just calm down,” or just like, “Let it go, we’re a community, and we should just let it go, all these friends, we’re all just doing this thing together, it’s all comedy.” And I think that people just need to learn how to listen better, understand people’s stories, why they feel the way that they feel, try to understand what it’s like to be them.

DON: In some ways, stand up comedy can be self-policed, the audience will give you feedback. I believe it’s always proper, you can say whatever you want up there. What Ottawa performers sometimes forget is so can the audience. So if you say something, you cannot just hide behind, “Oh, that’s just a joke.” I mean if we were to call you on it, they’ll call you on it, or fellow comics want to talk to you about it. You gotta either stand behind your material and have a reason to stand behind it, or maybe you should be rethinking what you’re doing.

CANDACE: I’d love to take [Coko’s anti-oppression] workshop. . . I honestly think it should be mandatory for your teachers to be taking courses like this.

DAPHNEY: There’s this frustration that I have to worry about someone saying something offensive. But everyone else is expecting me to put you back in your place. And so at the end of the day, we have to do better. And when you get called out, take the L. I mean, that’s how life is. Sometimes we fuck up. “I’m sorry,” then move on.

We also did some interviews this weekend for CBC to talk about the Truth in Performance event.
Dani Alon (Embassy education director) and Coko Galore talk about the importance of different perspectives in comedy, and Embassy faculty member Gilbert El-Dick discusses why we have our Inclusion Scholarship.

And Embassy team member Laura Hall had some things to say about the anti-oppression workshop Coko did for our staff.

And lastly, for those who want to take advantage of our scholarship, we’ve extended the application till this Friday, Sept 1.