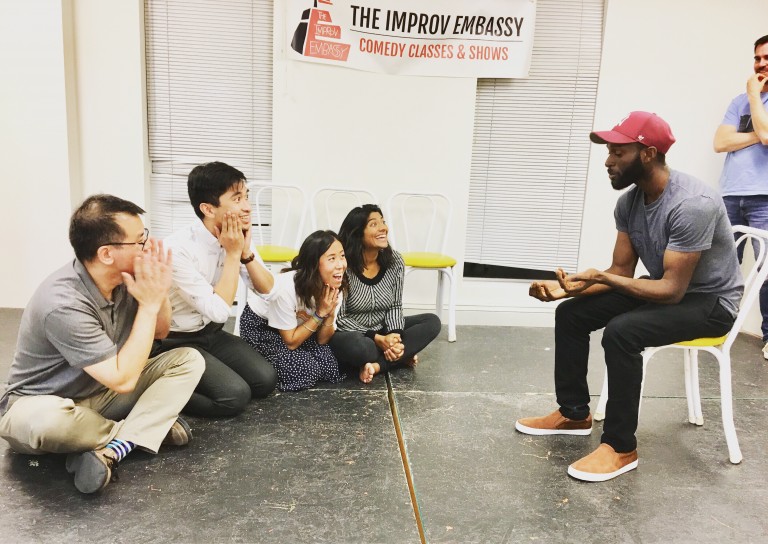 Never tried improv before? This is the perfect introduction! We’ll work on teamwork, listening and presentation skills through fun improv games. It’s a great way to improve your public speaking, have fun and meet new people.

This class is four weeks, two hours per session. $110 (+HST)
EARLY BIRD DISCOUNT: Register before 11:59 pm on Friday, February 14 for a 10% discount.
(FRIENDS DISCOUNT: Save $20 when you register yourself and a friend with the coupon code “FRIENDS” — please include a note of your friend’s name and email so we can add them to the class list)

CLASS POLICIES: There are no refunds or deferrals once class is in session (if you have to drop the class for whatever reason, there is the possibility of a discount to register for the next available class). Before registering, please read our policies on payment and other class expectations, to make sure that the class is right for you.

Joshua Mayo took his first class at the Improv Embassy in 2018 and has kept on going ever since. He loves organic scenes, awkward relationships and making strange sounds. You may recognize him from behind the box-office desk at the Preserve, from the Flaky Pastries, or as part of the duo Amarilli, Mia Bella! He’s a proud dog daddy—ask for pictures (at your peril)!

Gilbert El-Dick first studied improv under Hugh Neilson, Managing Director of the GCTC and Founder of the Canadian Improv Games, before finding his home at the Improv Embassy. Originally from Lebanon, Gilbert began his entertainment career there at the age of 4 in a TV commercial, and has since acted in plays, performed with a band, published poetry, and starred in local independent movies. Most recently, Gilbert was an ensemble member of the improvised D&D themed show “Quest Friends Forever” in the 2017 Ottawa Fringe. He also uses the word “awesome” way too often.